Thoughts on AGEING and MOBILITY

The Australian Institute of Health and Welfare notes that older people make up a considerable proportion of Australia’s population.

The number and proportion of older Australians is expected to continue to grow. By 2031, it is projected there will be over 5 million older people in Australia.

As a response to the increasing population of older people, Urban Planners are working with local government to plan and design for ‘ageing in Place’ a term used to describe a person living in the residence of their choice, for as long as they are able, as they age, as well as providing housing choice to allow downsizing, staying within locality.

Health Organisations around the world are urging the government to make it easier for people to be active, advising 30 minutes of exercise a day is critical. Promoting the use of Active Travel has been a direct response from government to this health advice.

As people get older they want to keep their independence which often includes driving as long as possible. However, a portion who do not want to or, can no longer drive still want to keep their independence while not being car dependent. To ensure older people can stay independent and mobile our street networks need to be designed to accommodate a safe network of connected streets taking older people door to door.

Walking is particularly important for seniors, who are less likely than younger adults to participate in more vigorous forms of physical activity, more likely to experience social isolation and less likely to drive a car.

Importantly, a significant proportion of older people walk more than 1 hour per week for transport related trips and walking for transport trips becomes even more important for seniors. Walking is critical to allow older people to conduct day-to-day activities, such as shopping, attending meeting places (sporting clubs, libraries and community centres) and visiting essential services like doctors and hospitals (Garrard, 2013).

In addition, the Council for the ageing (COTA) has collected information that indicates that around 25% of all children aged 12 years or younger in Victoria are cared for by their grandparents on a regular basis, making it increasingly important for there to be safe walking opportunities around schools, as the two most vulnerable road user types are engaging in trips together.

The increasing complexity of road systems is placing high demands on senior pedestrians. Older people are having to adapt to a high speed/high volume traffic system which largely fails to cope with their special requirements.

VicWalks notes that older pedestrians experience an average of 17 fatalities, 147 serious injuries and 114 other injuries in Victoria each year.

The most common crash scenario for older pedestrians is being hit by a motorist turning right as they exit an intersection – 18% of all crashes.

Vehicles colliding with pedestrians on footpaths, footpath driveways or at entrances to car parks, comprise at least 16% of all older pedestrian crashes, and 23% for those 85 and older.

Injuries arising from falls are a major public health and safety issue. A study by the Australian Institute of Health and Welfare determined that in 2010-11 there were 92,150 serious injuries due to falls in people aged 65 years and older, with approximately 30% occurring outside of the home or aged care facilities (Bradley 2013).

The Victoria Walks 2013 seniors research report indicated that the most relevant factors affecting the walking experience (as described by older people) are related to issues which could directly affect their feet, subsequent balance and may lead to a fall.

Older pedestrians have a significant fear of falling, either while walking along an inconsistent footpath, crossing a road with inadequate pram ramp crossings or as a result of being startled or bumped by passing cyclists or uncontrolled dogs off leashes (Garrard 2013). 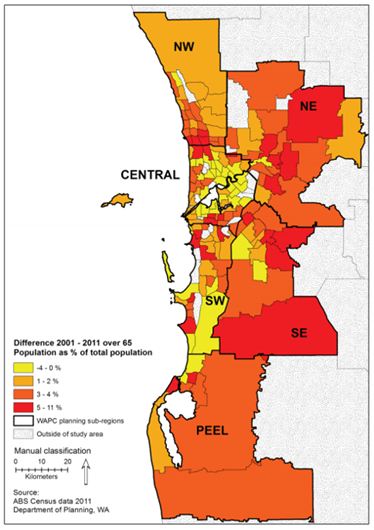 THE NEED TO IMPROVE OUR PEDESTRIAN NETWORK

Oxley, 2004 notes that poor road design remains a constant contributing feature in senior pedestrian crashes. Road designs are generally designed for vehicles and young, fit and health users. These designs often compromise the elderly by lacking basic features, such as:

Accessible Pedestrian Routes can provide a connected network of safe pedestrian routes to destinations such as bus stops, shops, offices, parks and community facilities and provide the alignments along which Disability Discrimination Act (DDA) requirements, Tactile Ground Surface Indicators and shore lining/crossing facilities are to be provided in a consistent and systematic way and maintained to the required standards.

We need to ensure traffic signals provide more time to cross for older people. The walking speed used for the design of intersections is 1.2 meters per second. On average however, older pedestrians walk at a pace of around 0.9-1.0 meters per second, which means in many cases they are unable to complete a safe crossing.

Late starts and parallel walks on signalised intersections are no good if you are walking toward turning traffic and cannot walk at pace.

Adopting PUFFIN technology for all signal crossings would assist. A PUFFIN crossing is a signalised crossing that has two sensors on top of the traffic lights (PCD pedestrian crossing detector and PKD pedestrian kerb detector). These sensors detect if pedestrians are crossing slowly and can hold the red traffic light longer if needed. If a pedestrian presses the button but then walks off, the PKD will cancel the request making the lights more efficient.

Alternative to this, is to undertake analysis of the local residents and locally extend the crossing times in areas with a higher population of older people, in conjunction with implementing an Accessible Pedestrian Route.

Will an autonomous future help?

An autonomous future will no doubt provide a mobility solution to all who need door to door service. The RAC Intellibus trial and regional demonstrations have demonstrated how this future technology will aid those with poor mobility or limited access to accessible public transport.

“Anyone can get old. All you have to do is live long enough.”

Sustrans recently released How to Create a successful age friendly neighbourhood?  key takeaways are in line with our research: