Everyone has noticed stickers in our streets, on signs, bus stops, and other street furniture. But have you stopped to wonder why are there so many and what's behind it all? The answer is known as Sticker Art, sticker bombing or slap tagging. Are the people involved vandals or artists? That depends on your point of view which can range from graffiti law breakers to world famous artists whose artworks can sell for astounding prices.

Sticker art evolved from painted graffiti. The spread of security cameras and patrols have increased the risk of apprehension for spray paint graffiti artists and driven the rise of sticker tagging which can be done in a few seconds with a low chance of being noticed. Interesting to note with International Women's Day being in this month, sticker art has increased the participation of women in street graffiti.

A common theme is to leave the tag message unclear or up for interpretation. That's why they generally seem strange. Stickers that make fun of corporate and political slogans are known as subvertising (ie subversive advertising). Many stickers have no meaning, may just give a touch of positivity or merely be building the tagger's reputation.

Taggers do have codes of codes of conduct. It is considered as disrespectful to put a sticker on other graffiti types. There are networks operating through social media to swap tags locally and overseas. This allows an individual's tags to be dispersed far beyond where they live and the code encourages taggers to send in-situ  photos back to tag senders. There are sticker collectors, some gathering vast numbers and trading with others. Some older established spray paint graffiti artists think sticker art makes it too easy to leave your mark and so look down on the younger generation at their heels.

Some reports suggest stickers took off in the 1980s, often on personal items such as skate boards, but I remember plenty of bumper stickers back in the 1970s. Graffiti has a much longer history with thousands of examples preserved on the walls of Pompeii.

And what do sticker taggers think of their own activities?

“I’d much rather see a bunch of stickers that someone put a little thought or creativity into than just the plain, boring, grey base of a streetlight,”

I love being able to give my art to the world, however lame it may be.

Stickers are like art that can go anywhere. I like to make the mundane more interesting and inject a message of love.

"Art for the people." And it's fun to have art tucked away in random places out in the world.

There is a relationship between sticker bombing and the "Occupy Wall Street" movement which was a worldwide protest against economic inequality and consumerism. While most of the community sees street graffiti as unsightly and illegal, others see it as the opposite. We are conditioned to accept commercial advertising stickers and posters on building walls, public phones, signs and even on the sides of buses and taxis. I hate the ads or "video stickers" that constantly pop up on web pages that I view and in my YouTube viewing. How many unwelcome ads do you see stuck in public and private places each day? Some sticker artists believe they are just taking back a little bit of public space that has been taken hostage by powerful commercial entities to push consumerism. Taggers also enjoy displaying their individual artwork creativity to the world and see themselves as improving the urban space.

Will we win the battle to remove stickers and other graffiti from our traffic signs? I doubt it, particularly for stickers as they are easily replaced and in any case the ones on the blank rear sides of signs are not covering any important authorised information. Also sticker art is now a worldwide culture with young people using it to develop their independence and make their mark in society and the urban space. 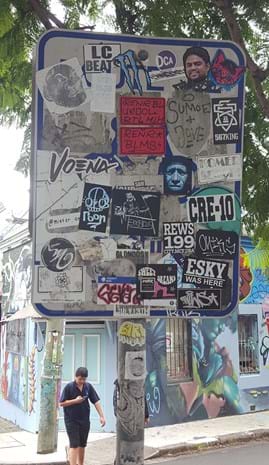 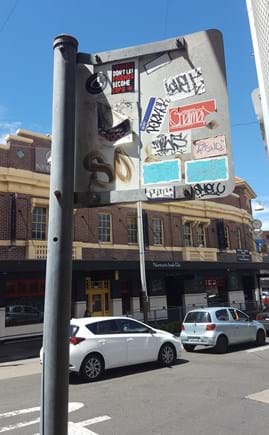